The Rise and Fall and Rise Again of a Resort Community 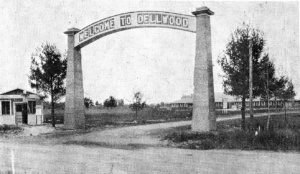 Original Dellwood Entrance arch. The Dellwood Pavilion is in the background on the right side of the picture.

Dellwood could be called the phoenix of Adams County.  Like the mythical bird that burned itself up and then rose from the ashes, Dellwood

prospered as a resort community in the twenties, collapsed in the depression and prospered again in recent years.

In the 1920s, Simon P. Linehan, a Chicago builder developed the area as a summer resort called “The Dellwood”.  Through his Badgerland Development Company, Linehan purchased about 3,000 acres along the Wisconsin River two miles south of what was then the unincorporated village of Holmsville.  (Holmsville residents soon changed its name to Dellwood.)

The largest parcel purchased for The Dellwood was the George Nemitz farm in the center of the development. The large Nemitz farmhouse became the “Community House” and was made available for the free use of all residents. 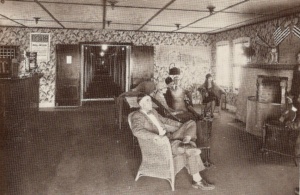 Linehan divided the property into lots 25 by 130 feet.  Roads 33 and 66 feet wide were built and paved with cinders. Lots initially sold for $47.50 each, but buyers were required to purchase a minimum of two lots. River front property was not divided into lots so that everyone would have access to the river.

Linehan offered to build one of four styles of cabin for lot owners “at cost” to attract as many first residents as possible.  He had model homes built near the Community House to promote the sale. 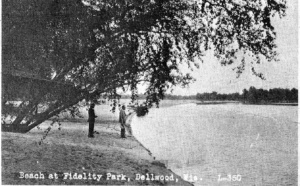 Fidelity Park on the Wisconsin River

Three “mammoth” public parks were included in the plan.  Two of the parks, “Dellwood Park” and “Roche-a-cri Park” were along both banks of Little Roche-A-Cri Creek where, The Adams Times assured readers “there is better fishing… than in the big river”.  “Fidelity Park” was at the south end of the development on the Wisconsin River.

Memorial Day Weekend, 1926 saw the first Dellwood sales promotion.   Letters to Chicagoans invited them to take the train to Adams, spend a night in the Friendship Hotel or other accommodations, ride out to Dellwood and view the property.   More than 300 visitors descended on the Friendship Hotel over the three days.  More than 25 people were turned away on Saturday night.  By the end of the 1926 season, more than 4500 lots were sold.

The 1927 Memorial Day Weekend promotion was just as exciting.  This time the train passengers from Chicago detrained at Dellwood (formerly Holmsville) because 50 units were completed of the new 150-unit Dellwood Hotel.

Electricity came to Dellwood in 1927 also. The Dellwood Power and Light Company was established consisting of a car motor generating electricity for two hours each day. 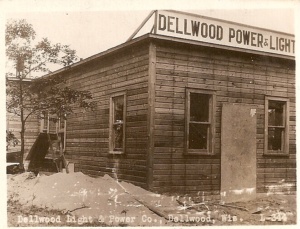 Also built in the spring of 1927 was a new “soft drink parlor and dance hall” with a promise that “In architectural beauty and appointments it will rival many city pavilions”.   The Dellwood Pavilion became the entertainment center of the area.  Famous bands from Chicago and Milwaukee came to play. A mirrored globe spun around above the dance floor casting light around the room.  Slot machine gambling (and probably bootleg hooch) was available in a back room.

With a popular dance hall, a large hotel, an elegant community center, a store, parks and a growing population Dellwood showed promise of even better times to come.  The 1927 promotion assured buyers that “Lots in Dellwood will never again sell at the price you paid.”  Unfortunately for many, that promise very soon turned out to be true, but not in the way it was intended.

After the stock market crash in 1929 many Dellwood property owners were wiped out and their property sold for back taxes.  Both the hotel and the Dellwood Pavilion closed their doors.  The hotel, which was on Dover Drive, was later dismantled and the site is now under Castle Rock Lake.  The Community House was sold to a private party.

Through the depression of the 30s and the war years of the 40s, “The Dellwood” was largely an abandoned dream and fading memory.

After the war, the Consolidated Water Power and Paper Company of Wisconsin Rapids began buying tracts of land on both sides of the river.  Under the name Wisconsin River Power Company they built the two dams that would form Castle Rock and Petenwell Flowages.  As the lakes filled, prosperity returned, highways improved, automobiles surpassed trains as the means to get from the cities to the country.  By the mid-1950s people were once again looking to Dellwood as a place to enjoy life on the water’s edge.  Today, Quincy is the most populous township in the county and thousands live or visit every year, year around.

Dellwood Pavilion in the 1940s

Some things remain from the old days. Some of the original houses built by Linehan’s company are still there today, albeit much changed from their original appearance.  The Community House is still standing at the corner of Thomas and Town Roads.  The roads platted and named in the 1920s are the same roads used today, including Linehan Avenue named for the original Dellwood promoter and builder.  The Dellwood Pavilion was not idle for long.  Frank Nowachek bought the pavilion in 1931 for back taxes and ran it until 1957.  After a succession of owners, renovations, and changes in entertainment tastes, the Dellwood Pavilion is still in operation today.  Fishing is still possible at the three park sites, but requires a boat as the sites are all under Castle Rock Lake.

Map of the original layout of Dellwood.

Acknowledgement: The Dellwood article is liberally adapted from articles by Carla Rathje Byrnes and Dolores Wood Bloomfield published in the Wednesday, April 11, 1984 “Special souvenir section” of the Adams County Times and Friendship Reporter .

This article also previously appeared in the winter 2002 edition of The Quatrefoil newsletter of the Adams County Historical Society.