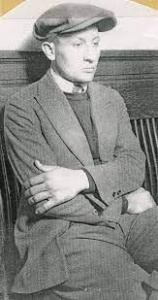 On March 3, 1922, a semi-comatose 23-year-old Harvey W Church of Adams, Wisconsin was put in a chair and hanged in Chicago for the murder of car dealers Bernard Daugherty and Carl Ausmus. The sensationalism of the case that led up to the hanging provided fodder for popular “true” detective magazine stories and for the growth of Harvey Church myths. Mercifully, after 100 years the case has been mostly forgotten among residents, but it remains part of the history of Adams County. As best can be reconstructed from newspaper clippings and magazines, here is the story.

The summer before his execution, Harvey Church told his sister Isabel that he planned to trade in his 1916 Harroun automobile. He wanted to trade for a late model Packard, the premier luxury car of the day. He and his mother Eva were planning to drive to Adams for a visit soon. Harvey presumably wanted to make a grand entrance in his hometown.

Harvey worked as a brakeman for the Chicago and NorthWestern Railroad and lived in a Chicago house he and his mother owned.

Harvey’s father, Edwin Church retired from farming in 1912 and moved the family to the newly platted village of Adams. The couple had had eight children, but all but two, Isabel and Harvey, had died in infancy.

On September 9, 1921, a 10-year-old boy found the battered body of Bernard Daugherty floating in the Des Plaines River in Maywood, Illinois. The hands were handcuffed behind his back, the neck was broken, and the head was crushed. Two hours earlier, the Packard dealership reported that Daugherty and another employee named Carl Ausmus had disappeared. They had last been seen the day before driving away from the Packard showroom in a new Packard with Harvey Church. Police immediately went to Church’s residence

A search of Church’s house showed signs of violence. A neighbor told police that Church and his mother had left the house that morning in a new car headed for Adams Wisconsin. Police notified the authorities in Adams. Ausmus’s body was found later buried in the garage under Church’s 1916 car.

In Adams, Police Chief Joseph Paulson found Church parking a new 1921 Packard on Main Street in front of the corner drugstore. His mother was in the car with him. Church told police that he had bought the car from Daugherty and showed what may have been a receipt but volunteered to cooperate and to drive the car back to Chicago.

Upon returning to Chicago, Church was questioned by investigators and eventually confessed to murdering both men to steal the Packard. Police doubted Church acted alone because he slipped and said we several times. Also, Church claimed to have carried Daugherty’s body in his arms for 10 feet from the car to the Lake Street Bridge rail. Daugherty weighed 220 pounds; Church weighed 135.

Although Church claimed to have acted alone, two other of Church’s acquaintances, Clarence Wilder and 24-year-old Leon Parks, were brought in for questioning. During the questioning Parks confessed to the murders and implicated Church and Wilder in a detailed description of the crime. Parks told how the three of them led Daugherty and then Ausmus into the Cellar of Church’s house, cuffed them, choked them, hit them with a baseball bat, and stuff their bodies in a coal bin until dark. Parks then described how after dark he and Wilder dug a hole in the garage, stuffed in Ausmus’ body and pushed the 1916 Harroun over the hole. He said he wasn’t involved in disposing of Daugherty’s body. 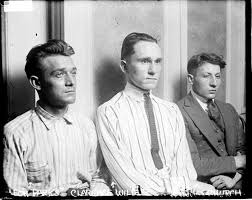 In the end, neither Parks nor Wilder were charged.  The state’s attorney decided to try Church alone and Parks and Wilder were set free.

Church went to trial in late November. He sat silently with his head down and showed little emotion throughout the three-week trial even as his sister Isabel testified in his behalf. Isabel said that Harvey had had several bad falls when a child. During cross examination she also said that Harvey had a strange desire to butcher chickens when they lived on a farm. On December 23, 1921, the jury convicted Church on the first ballot and recommended the death penalty. States Attorney Robert Crowe congratulated the jury saying, “The courtroom was filled with the spirit of Christmas during the trial … yet the 12 men on the jury saw the from the evidence that Harvey Church had killed two men, and he should pay with his life.”

On January 16 1922Judge John Caverly denied motions for a delay and for a new trial. He then sentenced Harvey to be hanged on February 17th.  Church hung his head and seemed to take no interest. When asked to stand, he didn’t, and bailiffs lifted him from his seat. When asked if he had anything to say, he didn’t speak, and was taken out.

Defense counsel immediately took steps to appeal to the Illinois Supreme Court for a stay of execution. They also made appeals to a higher court on the ground that Church was improperly arraigned and tried. Church’s lawyers were still arguing for an appeal when the gallows trap was sprung under Harvey Church.

In jail awaiting execution, Church began what authorities called a hunger strike and slowly lapsed into a coma like state. The week before the February 17th execution date Church was so weak that the authorities doubted that he could live long enough to be hanged. They decided to force feed him to keep him alive. Church was too weak to resist the feeding and could only lie on his cot and glare at his feeders.

The day before the hanging was to take place Church’s lawyers won a two week stay of execution on the contention that Church had become insane during his incarceration. Church had by that time become unconscious, but the lawyers wanted to have him examined by psychologists anyway. A new execution date was set for March 3, 1922.

Physicians and psychologists that examined Church determined that he had hypnotized himself into a state of unconsciousness by sheer willpower. They said Church was “mentally dead — not insane.” And Church would be unaware of the proceedings and feel no pain at his hanging. They concluded, “he has cheated [the state] of his real objective. He is a mental suicide.”

The Hancock paper had this to say about the actions to keep Church alive until he could be executed: ” 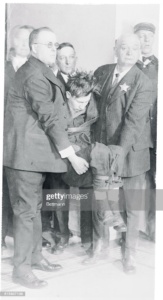 Harvey Church being brought to the gallows in a chair

The news editor is proud that he lives in a state that does not have capital punishment in its laws… or honest opinion is that for any government to be to deliberately take a man’s life, resorting to scientific means to keep the victim living until he can be executed, is a relic of barbarism.”

Harvey Church’s parents and sister visited him on the morning of his execution and tried to get him to speak. When the guards told him his family was there, he mumbled “father and mother – yes.” Later he tried to speak as his sister Isabel was leaving, but that was all. Five hours later he was dead.

Church’s body returned to Adams County the next week. The coffin was taken off the train at Grand Marsh, which was close to the cemetery. The private family funeral was observed, and his body was buried in the family plot in South Burr Oak Cemetery.

The sensationalism continued even after Church’s death. The Associated Press reported: “They buried their boy, not in the Adams churchyard at Adams, but in the baroque Methodist cemetery, 12 miles away… none of the dozens of atoms town folk who sent telegrams and letters to the mother made good on their promises to welcome the family back ‘home’.”

As the hometown Adams Advertiser reported the next week and locals knew, there was not, and still is not a cemetery in Adams. The Church family had been members of the Burr Oak Church when they had a farm nearby and had owned the plot since that time. As for the family being welcomed back, his sister Isabel did move back to Saint Paul where she had lived prior to the murders. Harvey’s parents continued to live in Adams. The mother, Eva Church was struck by a car in December 1927 while walking with her husband on Main Street in Adams and died a few days later. The father, Edwin Owen Church died of natural causes at the age of 75 in 1933. He had been honored by the Masons for his 50 years of membership in the lodge and was elected to the Adams City Council in 1931.

NOTE: A book about Harvey Church expanding on the contention that he did not act alone in committing the two murders.  Publication date is unknown at this time.