Housecalls common for the Country Doctor Who Delivered 2500 Babies

Dr. G.F.Treadwell of Adams County, according to one story, made several housecalls to treat a regular 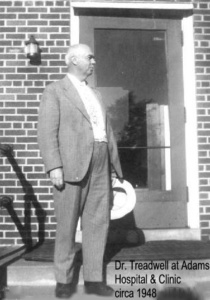 patient.  About the third trip, the patient said he was worried because he didn’t have the money to pay the doctor bill.  Dr. Treadwell said he could wait and not to worry.  The next trip, the patient could not pay him either, but still seemed worried when Dr. Treadwell said not to bother with his fee.  The man then explained that he had had to buy a machine on time and he couldn’t meet the next payment on that either.  With that, the doctor took money out of his own wallet, laid the money on the table, told his patient to make the payment and to stop worrying.  Such was the treatment that Dr. Treadwell gave to the citizens of Adams County.[1]

Glenn F. Treadwell was born in Illinois on June 23, 1877, the son of Mr. and Mrs. Henry Treadwell.  He grew up and attended high school in Wisconsin Dells (then still named Kilbourn).  After high school, in order to raise money for medical training, Glenn worked at several different jobs and taught school for two years before entering Marquette University Medical School.  Upon graduating, from Marquette he spent a year at the College of Physicians and Surgeons in Chicago and completed a two-year internship at the Milwaukee County Hospital in Wauwatosa.[2]

Dr. W.E. McGowan, (the resident of what is now the McGowan House Museum) was the Friendship village physician from 1885 until his death in 1893.  After Dr. McGowan passed away, Dr. Harry F. Frederick of Westfield practiced in Friendship for some years. Then, on February 8, 1912 Dr. Glenn F. Treadwell came to Friendship and stayed, except for a brief interruption, to practice medicine for over 40 years.

On his arrival in Friendship, the young doctor could not find an available office to set up his practice, nor even find a place to live.  The Chicago and Northwestern Railroad having just come in to the area, Adams was nothing more than a few boxcar houses and a railroad depot.  Friendship, though a well-established village in 1912, was in the midst of a building boom to accommodate the increase in business and population brought on by the railroad moving in nearby.  Fortunately, Mr. George Bingham, a prominent local citizen and landowner saw the new doctor’s plight, had an office built and found him a house in Friendship.[3]

Dr. Treadwell made his rounds over deep sand roads in a horse drawn buggy for the first three years of his sojourn.  He then bought a Ford automobile, one of the first cars in Adams County.  There were no hospital facilities in those days.  The doctor tried to keep up to date by attending medical clinics and through cooperation with the State Board of Health.[4]

In 1919 Dr. Treadwell married schoolteacher Nell Daly.  That fall the doctor and his bride moved to Faith, South Dakota where Dr. Treadwell started a hospital practice.  The following June, after experiencing one South Dakota winter, the Treadwells returned to Friendship and stayed the rest of their lives.[5]  They had one child, a daughter Jeanne, who grew up helping with the doctor’s practice, married and moved out of the area.

Dr. Treadwell came to patient’s houses complete with the traditional black bag.  His own bag was reputed to contain only three kinds of pills and a thermometer.  (A letter from Mrs. Jeanne Treadwell Fish dispelled the myth explaining that her father’s bag contained many items, and he had an obstetrical bag and a surgical bag in addition to his regular bag.)  House calls were the doctor’s main manner of treatment.  His office, at 206 Main Street in Friendship was usually empty.  If not in the office (or on call) the doctor may be found at his home on First Street a few steps away from the office. By telephone, his number was 8W.  He had no receptionist.  He answered the phone himself.

Honored for Forty Years in the County

In 1952, Dr. Treadwell was honored in a program at the Adams County Fairgrounds for his forty years of service to the area.  He and Nell arrived at the ceremony in a horse-drawn buggy reenacting his early house call conveyance. Friendship Postmaster James Horan was master of ceremonies for the event.  High School Principal A.H. Loken spoke as a one-time father-to-be appreciative of the doctor’s consideration.  Loken’s daughter Joan, a Treadwell delivered baby and a high school senior in 1952, spoke of the doctor’s kindness and concern for children’s ailments.

Friendship poet Winn McGowan, a lifelong friend of the Treadwells gave the main address.   McGowan made reference to the traditional country trades that had disappeared or were disappearing at that time – the village blacksmith and local miller gone in his lifetime, the country schoolteacher and the country doctor professions fast disappearing.  He recognized the many “Treadwell babies” who were in the audience.

Winn McGowan then quoted Dr. Treadwell himself on the history of his practice.  About his early years in Friendship Dr. Treadwell said, “My main line of work in those years was delivering babies throughout Adams County and making trips for the same purpose into all the adjoining counties.”

Pausing to do a mental calculation the doctor then continued, “I would estimate my baby cases at around 2,500 in Adams County and adjoining counties, practically all home deliveries up to the last ten years since which time many have been hospital cases.  This number includes at least twenty-seven pair of twins, and one birth of triplets born to Mrs. LaVere Klaus of White Creek.[6]  That was one of the greatest thrills of my lifetime, to have delivered triplets.”

The 74-year-old man then concluded, “I expect to deliver a lot more babies before I retire.”[7]

Dr. Treadwell did continue to work and deliver babies for two more years.  He died of a heart attack on Sunday, June 20, 1954 at the Portage hospital.  The funeral was held the following Tuesday in the Adams-Friendship High School auditorium to accommodate the doctor’s many friends.  Adams and Friendship business places were closed during the funeral.[8]

How Dr. G. F. Treadwell became an honored and well-remembered citizen in the community is summed up in something else he said, “My main satisfaction was to be of help to people wherever they lived and under all circumstances.”

This article previously appeared in winter 2004 edition of the Adams County Historical Society’s newsletter, The Quatrefoil.

[6] The triplets were Matt, Marion and Marie Klaus.  Matt and Marion lived to adulthood.   Marie died in childhood.