NOTE:  On January 3, 2002, the Niebull one-room schoolhouse was moved to sit beside the McGowan House Museum in Friendship and was re-dedicated there on April 27, 2002 to become 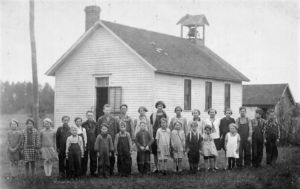 Niebull School about 1929 – Rena Petersen 5th from right in back row beneath bell cupola. 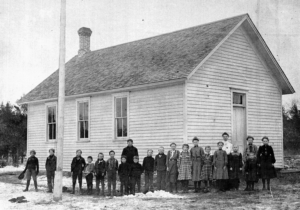 ACHS:  You taught in the one-room Niebull School.  What years did you teach there?

ACHS: How old were you when you started?

Murphy:  I was about 19.  You only had to go one year after high school to be able to teach then.  I went for training at Wautoma, and got my one-year certificate.  I later went to Stevens Point for summer school and night school

ACHS:  In a one-room school when you had all the different ages, how did you manage to teach all the grades at the same time?

Murphy:   In the morning we started at 9:00 o’clock.  We had first grade Reading.  They would stand and pass and would come up to the recitation bench.

ACHS:  Recitation bench?  What was that?

Murphy:  It was a long bench up in the front of the room.   It should be in the school house 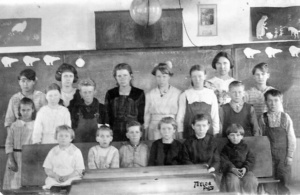 At 9:00 o’clock then, the first graders would come to the recitation bench.  They would recite and I would have things to show them on the blackboard.  They would go to their seats and the second grade would come up [and so on through] the seventh and eighth.  Then at 10:30 it was recess time.  Recess was 15 minutes and they all went out and played.  When they came back in we had Arithmetic. Each class came up the same way [until] Noon.  In the wintertime we had a half-hour [noon break] and in the spring and fall an hour.  After lunch we had English or Language. Half a year we would have English and the other half what we called Language.  It was poems and stories and stuff.  After that we had History and Geography.  Half of the year we had History and the other half, Geography.  After that we had recess again.  Then Spelling.  It was a process that the kids really got a lot out of because if they weren’t studying like they were supposed to, they were listening to what was going on and they learned a lot.  They were listening to the big kids and maybe the big kids were refreshing their minds from the little kids.

I don’t know what is in the Niebull Schoolhouse now, but when I went there and when I taught there we had double seats.  Two kids in a seat. That wasn’t so good.  They couldn’t keep their mouth shut, whispering too much.

ACHS: Did you have any duties out there besides teaching?

ACHS: So you didn’t have very far to walk, but I imagine some of the students did, right?

Murphy:  Yes, one batch walked two-and-a-half miles.  A lot of them walked a mile or so.   After I got the fire started, if it was very cold, the kids would stand around the stove.  It was a big stove with a big jacket around it.

ACHS: There is a sink in the schoolhouse now.  Did you have running water?

Murphy:  We had a pump, and used a water pail and dipper.  We would drink out of the dipper.  When I was teaching there we got a water fountain.  At noon when they had their lunch, somebody poured water in a wash basin for hand washing.  I think the dinner pails were set on the floor, but that seems kind of funny.  There might have been a shelf there.  If there was, it’s probably still there in the back of the room.  Some of them had fancy dinner pails.  Most of them had syrup pails.  [These were] round half-gallon pails they had bought syrup in. You used whatever you could get.  Nobody had any money.

ACHS:  Katherine McGowan would have been the Supervising Teacher, right?

Murphy:  She sure was.  The kids always hated to see her come because she always had a test for them. She was the Supervising Teacher when I went to School, and she was supervising teacher when I taught school.  She would tip toe in and you couldn’t even hear her.  Mr. [I.S.] Jones [the County School Superintendent] didn’t come very often.

ACHS:  There were eighth grade graduation ceremonies then, I suppose?

Murphy:  When I graduated from eighth grade we had a picture taken at the fairgrounds.  There were three of us, my two sisters and me [who went on to high school].  In our township, Big Flats, the township had to pay the tuition:  $72 a year.  They were quite disgusted to think that we went to high school.  The rest of them could have gone too, but they didn’t want to.  My dad really wasn’t “gung ho” about us going to high school because he never did, but my mother had.  Well, she didn’t go either, but she taught school.  My dad said, “If you stay home Rena, I’ll give you $5 a week.”  My mother said, “No, she’s going to high school.”  See, when my mother taught, she had graduated from eighth grade.  Then she went one summer to summer school at Stevens Point, and then she taught school.  And she taught Niebull School.  That’s where my dad and my mother met.  All the young fellows were looking out for the school ma’ams.

ACHS:  Who were your teachers when you went to Niebull School?

Murphy:  My first grade teacher was Jesse Matthews. Most generally, they only stayed two years.  I had a list of them somewhere. Pearl Knudsen, Gladys Nobel, Ortha Kleven, Clara Machovec Jensen, —

ACHS:  Clara Jensen was your teacher?

ACHS:  What do you think about having the Niebull Schoolhouse moved over here by the McGowan House now?

Murphy:   I think that is great. Nobody saw it out to the fairgrounds.  People can now go in there and see what the one-room school looked like.  I hope that everything is pretty much the same as it was then.

ACHS:   There is a flagpole in the pictures of the Niebull School. Did you have flag ceremonies then?

ACHS:  Pledge of allegiance and all that?

Murphy: Yes.  Somebody had the honor of raising the flag.   It was taken down every night and put up every morning.

ACHS:  In the 1905 picture of the school, there isn’t a bell on the schoolhouse

Murphy:  When the bell was put up there it must have been 1913 or 14. The picture of the Niebull School that I gave Joan [Jones] is the picture with the belfry on top.  Joan said that they are wondering if the roof would hold that big bell.  I said, “Well [the roof] held it for many years, and I don’t know why it wouldn’t hold it now.”   I believe my dad bought that bell.  He and Pete Sorensen put it up there.  That was when my mother was teaching there.  I think Dad was trying to impress her. 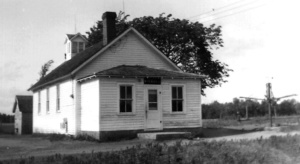 Niebull School as it appeared when Rena Petersen Murphy taught there.

[Note: The Murphy family kept the bell at their home after the Niebull School closed.  They donated it back to the Society for the schoolhouse.]

ACHS:  The sign is over at the schoolhouse too.

Murphy:  The one I made?

Murphy:  Yes, but that sign, it was kind of funny because it was made out of twigs.  I put them on with tiny nails.  I did that when I was teaching there.  [The Historical Society people] said they were going to have to put it into some kind of a case because if they just put it out in the weather it would soon deteriorate.  But it was out in the weather quite a while.

ACHS:  I saw the sign sitting on a shelf when we were in the school recently cleaning.

Murphy:   That was another thing we had to do when I was teaching, clean the school.

ACHS:  Did you get the students to help?

Murphy:  No.  I usually did that, or some of the ladies in the district would come and help on Saturdays.

ACHS:   There is a front porch on the schoolhouse in some of the later pictures.  Was that there when you taught there?

ACHS:  There is lots of equipment in the Niebull Schoolhouse now.  There is a piano and an organ.  Did you have anything like that?

Murphy:  No.  We had a record player, but no piano or organ.  Not while I was there.  The globe was there and there were maps that pulled down.  Blackboards were all on the front. There were pictures, I suppose there was one of Washington and [one of] Lincoln.  We didn’t have many books, but we had books taken from one school to another.  We had a case.  You would have the books for a while and then they would be taken to another school and we would just exchange.  Of course we had books that were staying there too, but not many.  Is the bookcase there with the glass?

Murphy:  The bookcases were along the side. Along the front they had built a place for books and teacher’s supplies.  I don’t know if that is still there or not.  That was put in there when I was teaching.

ACHS:  Do you think teaching was better then?

Murphy:  We didn’t have any trouble with the kids.  If they got a shake-up at school, they got one at home too.

This article first appeared in the Adams County Historical Society newsletter The Quatrefoil in the Winter 2002 edition.