Otto “Ottie” Roberts (1914–2001) and his brother Alva “Alvie” (1910-1985) were entrepreneurs of many businesses.  They were best known locally for building Roberts Motors into one of the largest Ford dealerships in Central Wisconsin.  Perhaps their longest enduring legacy, however, is their venture called Friendship Mobile Homes, Inc. where they built a travel trailer called the Friendship Vacationaire.  Fifty years after this well-designed, well-built trailer went out of business; many are still in use, still being praised by owners, and still being sought by camping people all over the country.

The Roberts brothers incorporated Friendship Mobile Homes, Inc. on Christmas Eve 1956.  The original directors were Ottie, banker Fred Veeder, attorney Don Holman and newspaper man Virgil Tobin.  Ottie had been building travel trailers for his own family since the 1940s and had plans ready to go.  They set up shop in a Quonset building on 2nd Street in Friendship and started manufacturing trailers almost immediately.  A new 1957 Friendship Vacationaire travel trailer made its appearance in the Friendship Centennial parade on July 25, 1957.

The original small camper had two beds, one on each end; a gas stove; storage room for cooking utensils and room for fishing and hunting equiopment.  A boat trailer was also available.  Designed primarily for sleeping, this trailer was built tall enough for a six foot man to stand up in, and was very comfortable.

A roomier 13.5 foot long trailer was also available having  two beds in bunk style; a gas stove for cooking; a sink; and other deluxe features.

Several design and construction features made the Vacationaire stand out from the rest of the trailers being built at the time and contributed to the trailer’s continuing popularity today. 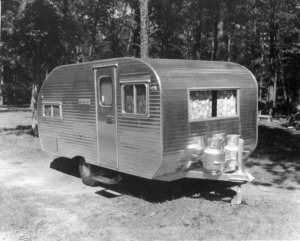 Construction wise, where other manufacturers used only fasteners to connect parts, Friendship Mobile Homes used glue and screws providing a durable, vibration-proof connection.  Double floors, walls and ceilings contributed to the sturdy build.  The sturdy construction meant that the Vacationaire had better crash survivability than other trailers as evidenced by the difference in accident damage of Vacationaires and competing trailers.  The sturdy construction also is likely one of the reasons why the trailers continue to be in use today. 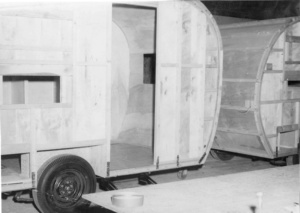 Employment at Friendship Mobile Homes involved a crew of usually 10 or fewer workers with many part-time, odd hours worked by people who held other jobs.  Pay was not great but dedication to producing a quality product was high. 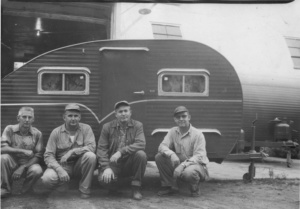 In addition to Ottie and Alvie, quite a few people worked at Friendship Mobile Homes over the years.  Principle workers included shop foreman Russell Henningson , Howard Hamill, Ed Volkening, Ed Priminau, Charles Primus, Claude Roberts and Bob Frederick.  Bob Ebert worked at Friendship Mobile Homes from 1960 to 1966.  High school student Eugene Peterson welded frames there for a short time and proved to be faster than older welders.  John Lecy worked for a while after graduating from high school before he started driving trucks.  Mert Alderman, a 115-pound jockey worked there a short time.  Beldon Schroeder built frames for the company, as did Paul Luth.  Ole Lund and Holman Casey both worked there some time.  Floyd Roberts worked there summers during college installing windows.  He also drove to Wausau to buy axles and to Elkhart, Indiana to get other needed parts.  Ruby Hamill (Howard’s wife) worked there as a bookkeeper/secretary.  Maxine Elkington succeeded Ruby in the job.

The late 1950s and early 60s was an ideal time for the travel trailer industry.  The camper travel boom that continued into the 21st century was just starting and the market was wide open. Demand for the Vacationaire rose quickly.  The firm outgrew the Quonset building and Roberts’s built an adjoining building to the south.  They also may have built trailers in the former Picus Furniture Store building on Main Street east of the Quonset. 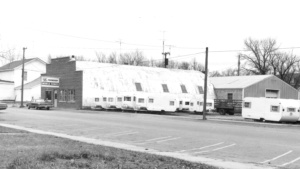 Friendship Mobile Homes buildings from the northwest with the Quonset in the center, the additional building to the right and the rear of the former Picus Furniture building on the left. 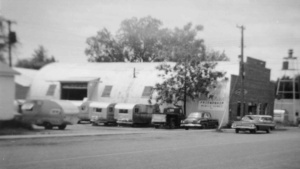 The success and popularity of the Vacationaire likely made the company an attractive target for investors.  Perhaps the offers were too good to pass up,  or maybe marketing the trailers became a bigger job than the brothers wished to take on.  For whatever reason, in late 1965 they sold Friendship Mobile Homes, Inc.  Herbert Sueoka became the new company president, Grover Batton the general manager, and Phil C. Hardy the sales manager.  Russell Henningson stayed on as plant manager and most of the original crew stayed as well.

The new owners expanded production, embarked on a big sales campaign and expanded the line to include four Vacationaire models: two higher riding Pioneer models and a 20.6-foot-long Town and Country model.  They expanded the manufacturing space by 10,000 square feet in 1966 but could not build trailers as fast as dealers could sell them. 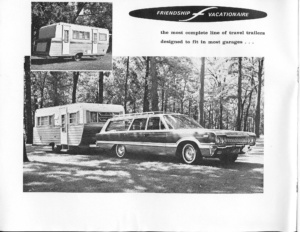 In 1967 the owners moved the operation to the former Regal Boat plant on South Main Street in Adams.  The new location was much larger than in Friendship and facilitated assembly better.  The owners predicted an eight-fold increase in output for 1967.  It didn’t happen.  Soon, financial problems mounted as the high cost of the expansion was not answered by sales receipts.  Employees often discovered that their paychecks were no good.  At one point, workers arrived at the plant to find everything there red tagged by creditors so nothing could be taken out.  Somehow the owners were able to make good that time, but not for long.  They appealed to the Adams County Development Corporation to help finance a recovery.  When the Development Corp. turned them down, they moved the operation to Waupaca.  By 1970 they were out of business.

Today, you can still check on the web almost any time and find a Friendship Vacationaire or two listed for sale.  Or look in your neighbor’s back yard.  The trailer that was built to last has lasted. 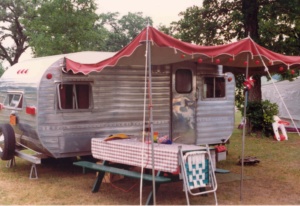 This article first appeared in the Fall 2009 edition of The Quatrefoil newsletter of the Adams County Historical Society.