The Rise and Fall of the “Finest Mill in the State”

Written by Harry Davis from research by Jerry Carlton 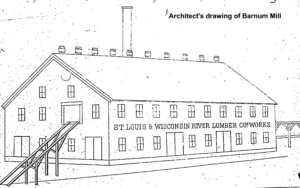 “There are also five sawmills in the county, the best one of which is situated at Barnum, in the north west part of the county and on the bank of the Wisconsin River, and is driven by steam.  It is said to be the finest mill in the State.” The Adams County Press, Friday, March 27, 1868

Sawmills built in the 1840s and 50s built along the upper Wisconsin River cut the forest logs into lumber.  Rafts of lumber were then floated over the treacherous rapids south of Plover and down the Wisconsin and Mississippi Rivers to St.Louis and other cities.  A group headed by Mr. Theron Barnum, of St. Louis figured that it would be much cheaper and safer to float logs through the rapids, trap the logs below the rapids and cut them into lumber there.  .

So Mr. Barnum and his associates formed the St. Louis and Wisconsin River Lumber Company in 1865 to build a sawmill in Adams County.  They bought 367 acres of land in Section 28 of Rome Township[1] including islands in the river together with control of the riverbank for about two miles. The Company also owned 6,000 acres of pine forest elsewhere in Wisconsin that would supply logs to the new mill. The Company then set about building a huge sawmill.[2]

D.H. Moran, an experienced millwright from Missouri was hired to build the Barnum mill.  The machinery for the mill was purchased from the Milwaukee firm owned by Mr. William Goodnow.[3]  The river’s current was not swift enough to power the mill saws.  Instead, a massive steam engine was brought in for power. 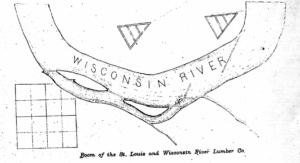 During the mill’s construction a visitor to the site gave this account:

“On reaching the town of Barnum, about twenty miles below the rapids, and one of the most beautiful town sites I ever saw, … I took a stroll to the precincts of a big mill in process of construction. …. I found the Superintendent of the company’s works, Mr. Moran, who proved to be very much a gentleman, and who gave me all the desired information.  The main mill is 80 X 120 feet and when completed will cut about 30,000,000 feet of lumber perannum, besides large quantities of shingles and lath.  The peculiar location of the boom[4]—protected as it is by islands – renders it a perfectly safe harbor for logs, and obviates all the difficulties so much complained of above the rapids.”[5]

The village of Barnum started to grow.  A hotel, managed by Andrew B. Bronson opened in February 1866.  A physician and oculist, Dr.Lewis Bronson (a relative no doubt) set up practice in the hotel.[6]  Andrew Bronson then got out of the hotel business and opened a dry goods and grocery store (“Goods sold as low as by any house this side of Milwaukee”).[7]  A new hotel owned by J.W.Hammond had its Grand Opening on New Year’s Eve, 1867.  William Harrison’s gristmill started operating in 1868 on a creek nearby. [8]  Houses for the Barnum Mill management were built on the high ground over looking the village.  Barnum School and a Methodist Episcopal Church were also soon organized and built.  By the early 1870s Barnum was a thriving village with 15 or 20 houses where about 60 mill employees and their families lived.

Some Missteps and Some New Owners

Not much is written about how well or poorly the Barnum Mill did in 1866 and 1867.  It may not have been operating much or at all in those two years.   At some point during this period, the Company vice-president, William Goodhue of Beloit replaced D.H. Moran as Superintendent of the Barnum Mill. The newspaper was still referring to the “new” mill in Barnum in 1868.   Although the mill was capable of turning out 100,000 feet of lumber each day, apparently actual production was far short of that for the first few years.

Mill owner’s disagreements and other disputes led to the mill being shut down for a period.[9] Default on property taxes led in turn to foreclosure on the mill and the Weed Lumber Co. of Oshkosh bought the property in 1872.  They immediately made improvements to the mill and started making it a profitable operation.

Solon W. Pierce, the editor of the Adams County Press visited the mill in October of 1873 and described the mill as it was under the Weed Lumber Co. The basement of the two-story building housed the boilers and a 240 horsepower steam engine that drove all the machinery.  The mill was really a double mill with two double rotary saws. A chain conveyor brought logs from the water into the mill and dropped them on the saw carriage.  Sawyers rolled the big logs into position and the log passed through the saw. The sawed boards moved down the conveyor to the edger.  After being sawed, edged and ripped, the boards were carried out on rolling cylinders to the rafting sheds.  The rafting sheds were 40 feet wide and 135 feet long. There the boards were stacked into cribs to be tied together into rafts.  When the crib was complete, the shed floor was tilted and the crib slid into the Wisconsin River.[10]

All went well at the mill for the next couple of years.  The town of Barnum continued to grow and the mill kept busy.

A lath and shingle mill was added to the operation in 1874.[11]  The shingle mill was operated by one man and could turn out 100 million shingles per day.  These shingles were taken to market as “deck loading” on the lumber rafts.[12]  In the fall of 1875, the company built a planing mill above the sawmill.[13]  By February 1876 they announced that “The Barnum Lumber Company have their planing mill running, and people can get all kinds of dressed lumber there, at very reasonable rates.”[14]

In the midst of the business doing well, bad events started happening in Barnum. In January 1875 Barnum’s only hotel burned down.[15] Then in April ice broke through the log boom causing the loss of many logs.[16]

The next year started out very promising.  In April 1876 there were 12 million feet of logs in the Barnum booms and the mill was cutting at the rate of 60 thousand to 80 thousand feet of lumber every 12 hours.[17]  Then in June the river broke through one of the islands between the slough the mill used and the main river.  Many logs were lost before the new channel could be dammed and closed.[18]

The mill continued operating successfully through the summer and fall of 1876 and shut down for the winter in October.

Then serious trouble ensued.  Shortly after dark on Wednesday November 8, 1876, Mill Superintendent Andrew Bean was driving his buggy on the road from Grand Rapids when someone stepped out of the bushes and tried to grab the team of horses’ by the bits.  The startled horses jumped and the intruder lost his grip.  As the buggy passed him however, the intruder took a shot at Bean.  Bean returned fire with his own pistol and the intruder ran off shouting, “For God’s sake don’t shoot me!”[19]  Two nights later the Barnum Mill burned to the ground.

An arsonist almost certainly caused the fire.  The fire started on the river’s side of the mill in one of the remotest areas of the facility.  Firefighters discovered that the pumps intended for use in case of fire had been tampered with and were inoperable.  The entire property was destroyed.[20]

No one was ever identified as having started the fire. People speculated that the person who tried to stop Mr. Bean on the road may have been a disgruntled employee and might have started the fire.  It is also possible that the Company may have hired someone to set the fire.  Such things were known to happen.  The railroads were taking over the lumber transportation business and the supply of logs from the northern pine forests was dwindling.  Many sawmills were burned for the insurance money. It could have happened to the Barnum Mill.

The Weed Lumber Company did announce that they planned to rebuild the mill, and did, in fact rebuild the planing mill, but the sawmill was not rebuilt.  The sawmill being the village’s only industry and reason for being, the businesses and houses soon started to disappear as well.  Neighborhood farmers moved the houses to their own property or tore the buildings down for the lumber.  Within a few years nothing remained.

Note:  The above article was compiled almost completely from the research papers of Society member Jerry Carlton whose great grandfather Robert Morris Burroughs worked at the Barnum Mill.  Referencing the original documents rather than the research papers seemed like a good idea at the time.  Thanks Jerry.  Ed. 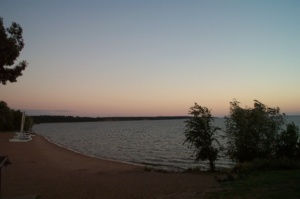 [1]  The location is now Barnum Bay on Petenwell Flowage near County Road Z and Aspen Ave.

[2] Prospectus and By-laws of the St. Louis and Wisconsin River Lumber Company 1865, page 5.

[3] Prospectus and By-laws of the St. Louis and Wisconsin River Lumber Company 1865, page 6.

[4] A “boom” refers to a string of logs chained together end to end across the river to trap the logs floating down river.  “Boom” also referred to the whole log entrapment facility as the writer did in this case.