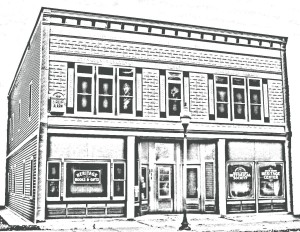 The books listed below are in stock and on sale at the Adams County Historical Society’s Heritage Books & Gifts shop, 311 Main Street, Friendship, Wisconsin.

The books are also available by mail; send remittance with name and address to Adams county Historical Society, PO Box 264, Friendship, WI 53934.  Add $5  per individual book for shipping and handling.  (Add $10 for the two volume “Friendship Wisconsin – a History”)

“FRIENDSHIP WISCONSIN – A HISTORY”  by Dennis M. McFarlin. A two volume set presenting the history of a small village in Adams County in central Wisconsin. Volume One of the book presents the history of the village through subject categories, such as education, health care, government, lifestyle, and the early geologic history of the area. Volume Two presents a block-by-block review of the businesses that operated in the village from its inception in 1856.   Having 934 pages, with 600 photos and images 10,000 endnotes, it is meant as a research source. The Book store price is $65.00.

“FROM PAST TO PRESENT” A comprehensive history of Adams County by Michael Goc. $20.00

“GROWING UP POOR” by Joseph Soulak. (Memories of Wisconsin life in the central Wisconsin Railroad town of Adams.) $5.00

“HERO OF THE RED RIVER” The life and times of Joseph Bailey by Michael J. Goc. A Collections of letters discovered in an old Wisconsin Dells building was the catalyst for this history of Colonel Joseph Bailey who owned a small farm in southern Adams county. His friend, a local attorney who stayed behind after Joseph entered the Civil War had saved them and gives an eye opening portrait of a man who accomplished much in his military career. $12.00

“K” A GIRLS LIFE IN FRIENDSHIP DURING 1905 & 1906. by Sharon Hart Addy for the Adams County Historical Society about young Katherine McGowan who became a teacher and Supervising Teacher overseeing the many schools in this rural county. $10.00

“LOOKING BACK” by Walter J. Kappel. The middle son of Austrian immigrants tells of his life from 1914 through WWII.  $10.00

” MURDER IN ADAMS COUNTY” by Merlyn Ruphus. The notoriety of Adams County as ‘The Murder Capital of the United States’ is documented in this fascinating book. $20.00

“NEW CHESTER” by Barbara Morgan (A history of this small community and the surrounding country) $8.00

“POWER IN MANY HANDS” by Michael Goc. Tells the story of Adams-Columbia Electric Cooperative and of the communities it serves in twelve central Wisconsin counties. The beginnings of local REA services. $20.00

“ROCHE-A-CRI TO TRINITY” (The History of Trinity Lutheran Church in Arkdale, WI.) $10.00

“THE HISTORY OF A-F SPEEDWAY” by Matt McLaughlin (Well documented history of a Adams County favorite. Many wild characters and even wilder racing!) $30.00

“THE TANGNEY & DAY FAMILIES OF ADAMS COUNTY, WISCONSIN“ by Linda Berg Stafford. Winner of the 1994 Family History Book Award from the Wisconsin State Genealogical Society and State Historical Society of Wisconsin. A beautifully executed genealogy of two branches of the Tangney family spanning 6 generations, and eleven generations of the Day family. (We have received multiple copies of this book to be used for fundraising. In most cases our society has received only 1 or 2 copies of family genealogies which we hold in our archives for research.) $25.00

“TO THE LAST BIRD“ by Evalyn Attoe Blumer & Jerry W. Carlton (a saga of generations of the bird family as it progressed westward eventually settling in central Wisconsin, describing their involvement in the development of the new city of Madison and constructing it’s new capitol building) $7.50

“TWO FATHERS, ONE WAR” by Marcia L Pollock Wysocky. A daughter’s story of her natural father and step father one in the European theater and the other in the Pacific theater of World War II. $25.00