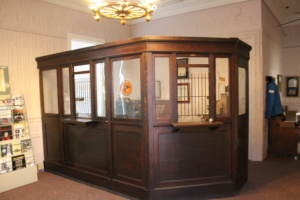 The Friendship State Bank was the first bank in Adams County.  The bank was housed in the Gunning-Purvis Office Building in Friendship that is now the Adams County Historical Society’s Adams County Heritage Center.  The bank opened in 1912, soon after the building opened. The bank closed in 1936 during the depression as did many, but the old bank vault and the safe inside it remained.  The ornate cage that the tellers stood behind and dealt with depositors behind the bars was taken out when the bank closed. It was ruined some years later in storage.

Now an antique bank cage was found and installed.  The new cage makes the book shop in the Center look like it could be a set for a 1930’s movie. Ring the bell to get the teller’s attention